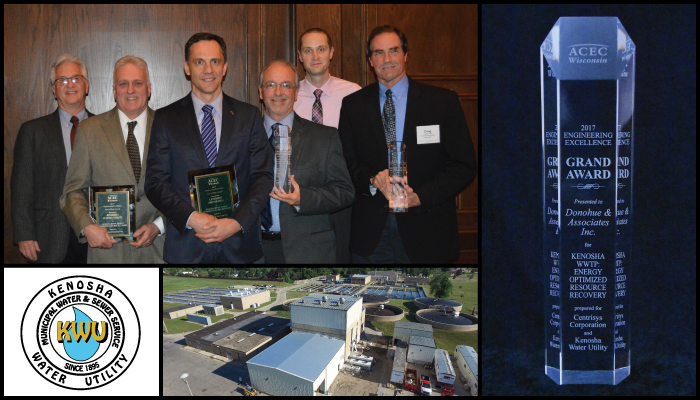 Kenosha’s Energy Optimized Resource Recovery Project received this year’s top Engineering Excellence award from the American Council of Engineering Companies (ACEC) of Wisconsin. The Grand Award was presented to Donohue & Associates, Kenosha Water Utility, and Centrisys Corporation at ACEC’s annual banquet in Kohler, Wisconsin. This prestigious award recognizes a project representing the highest degree of technical innovation, client satisfaction, and contributions to the engineering industry. The Kenosha project was selected out of six Best of State finalists in the competition.

Kenosha Water Utility set out a progressive goal of a more sustainable wastewater treatment plant. The plant treats more than 22 million gallons of wastewater each day and, prior to this project, the solids left over from the process had to be loaded onto trucks and hauled away to a landfill. Additionally, the electricity to run the plant increased costs because the facility did not produce its own energy.

Donohue developed a plan to address these issues. The design used technologies that had not yet been used in North America. The newly installed PONDUS system is one of a handful in the world, delivering a 30% increase in biogas production because of its superior methods in breaking down waste solids.

Alongside this system, centrifuges were installed that significantly reduced the amount of water used in the system. This allowed the facility to cut the number of digesters in half, saving money on operations and maintenance costs. Overall, the new process is expected to save the Utility in excess of $500,000 each year.

Because of the improvements, biosolids that previously had to be transferred to a landfill were reclassified and the nutrients are able to be reused in a beneficial way. The increase in biogas production has allowed the facility to use that energy to power the plant, cutting down on costs.

The project was focused on a solution that was both practical and sustainable. The team delivered by using cutting-edge technology that met environmental goals and reusing waste materials to realize extreme cost savings.

Awards judge Anna Varney, PE, said, “This design is a great example of integrating innovative technologies into existing infrastructure. Now the main heat energy supply comes from waste heat, biogas is converted into electricity, and biosolids are Class A to be used as fertilizer instead of Class B which was previously hauled to a landfill.”

Ed St. Peter, Kenosha Water Utility General Manager, stated “We’re proud to take a stance in the management of our wastewater treatment facilities that is fiscally responsible to our ratepayers but also supports long-term sustainability for ecological balance. It goes to show that with the right critical thinking, commitment, and steps, sustainability can be achieved cost-effectively. We’re very proud that the Kenosha treatment system demonstrates such a balance.”